TIME FOR HEROES - Summer of London 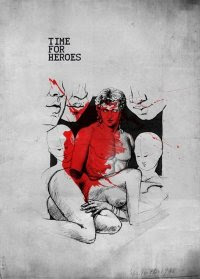 Time For Heroes is an event showcase dealing with live music, photography, art, poetry and illustrations giving people a platform to find all things new and exciting in the creative world.
The next event shall be at the Queen Of Hoxton on the 24th of July featuring a dj set from Robbie Furze of The Big Pink who have just returned from recording their debut album in New York and are tipped as the sound for 2009 by BBC music, they are also fresh from a great performance at the John Peel stage in Glastonbury.
The headline live performance will be Ipso Facto who recived great acclaim from their recent support slot for the Last Shadow Puppets. They are currently working on their debut album and look set to capatalise on their already cult following. Hot on their heels in this event will be HTRK (title pronounced HATE ROCK) Australian formed band with the explicit intention of making "music" as far removed from the indie rock template as was physically possible. Next in the live line up will be new band ones to watch R O M A N C E , already being billed as your soon to be new favourite band by music writers including NME. Doors from 8pm -2am, entry £8 before 10pm after £10. Theme for the night is Black & White dressed.
Also a date to be confirmed for the eagerly anticipated live performance of the one and only Peter Doherty for Time For Heroes, news coming very soon.