Robin's Summer Reading - Apathy For The Devil by Nick Kent

Some healthy reading for summer : Apathy for the Devil by Nick Kent , the self proclaimed ' Zeitgeist surfing dark prince of seventies rock journalism'...
I had years ago
religiously
read 'The Dark Stuff', his collection of essays and articles about, well, all the most important rock artists you can think of, from Phil Spector to Iggy Pop and Bowie to Kurt Cobain. Yes the essays are extremely clever and witty and spot-on and blah, but they are definitely not as good ( and as hilarious) as his own memoir where his own teenage, sexual, social and musical experiences collide with the times of the 70's... 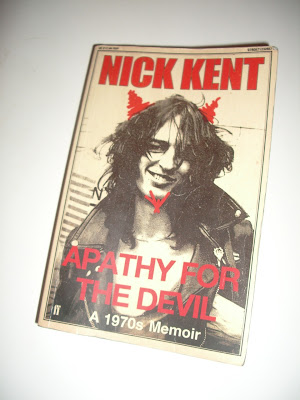 Including some gems as :
"These people (the Band, the Beatles in 1970) were just disappearing behind a forest of their own testosterone. That's why the Stones were always the best-looking rock act of that era. Five members and yet no facial hair whatsoever. They always had their priorities well sorted."

"I turned to my right and saw a figure approaching. he had ink-black hair and a big village-idiot grin breaking up his features like a split coconut. Once again I found myself face to face with Sid Vicious."

"They say good taste is timeless. But bad taste has been around just as long and is invariably more lucrative."

I could go on forever so BASICALLY, A MUST READ THIS SUMMER. any other suggestions?
Posted by Alban ADAM