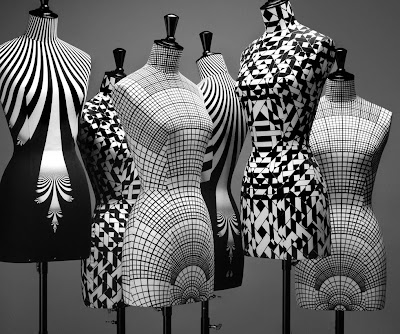 Paris based Emmanuel Bossuet is one of the rare art directors of his generation to conceive his work with such an intense decorative dimension. Graphic prowess is the genuine credo of this Paris best-kept secret.
Debuting as a graphic consultant at Philip Starck’s he very soon after established EEM as an agency aimed to one-of-a-kind projects. Studios like Martine Sitbon or Sonia Rykiel to name few requested him for his skill as a decorative designer. Alongside, brands like Cartier, Lalique, Swarovski or Knoll often asked him to express in sound terms their immaterial heritage.

Emmanuel also usually looks for new ways to express his fascination toward display installations. One of his favorite game is to divert them from their prior function and turn them into arresting pieces.
As an new opportunity came up this year with a carte blanche offered by the M&K Paris agency, Emmanuel decided to collaborate with historic mannequin masters STOCKMAN to produce limited edition "haute couture" busts.
His plan was clear : to turn the basic shape into a blank canvas for the very patterns he is used to, but colliding with it, enhancing it, resetting it and ultimately adorning it. As a result, a variation of 3 pieces, all black and white, reveals in a unexpected light the atemporal aura of the archetypal silhouette. 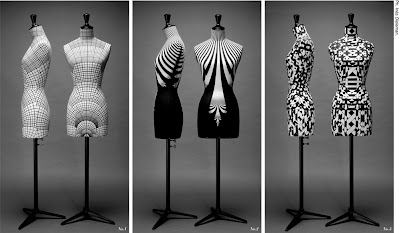 These pieces final coverings made with printed fabrics were demanding for accurate and unparalleled adjustments. They were possible thanks to the know-how of the STOCKMAN workshops : as every bust is till now entirely made by hand according to the grand tradition of the brand dating back from 1867.

The Haute Couture Busts will be exhibited in Paris from September
before touring to London and Milan.