Robin Reacts - Cutting you up in pieces is easy, but stitching you back together is very hard (part 1)

So apparently it’s time to draw conclusions about our decade, those so called noughties…I don’t want to sound like an old fart or sink into nostalgia, but they started quite well, I mean in terms of fashion of course.

2000 seemed to be the moment where everything was possible : young and talented blood taking over sleepy houses and younger brands supported by press, buyers… Remember a time where Véronique Branquino’s name was actually as promising as Nicolas Ghesquière at Balenciaga? You don’t? Well, I do. 10 years later, most of the independent designers have disappeared or seem meaningless, independent press has become more reactionary and greedy than the establishment itself. The rules have changed – if there has been any – and the only feeling I have towards the fashion industry at the moment is not a celebration of diversity but a mere observation of pure schizophrenia. (More of that in another post…)
I am not going to try and analyse the whole thing or re-write the decade, let’s say I just want to share some (biased of course !) opinions…

In 2000, 2 brands were way ahead everyone else (and they still haven’t finished influencing all the industry) in terms of design, communication, strategy, collaborations, and even retailing : Helmut Lang and Martin Margiela. I don’t think I have to demonstrate this but if needed, we can show how we all work in a post Helmut/Martin world (so much that we don’t even realize it sometimes). They were the designers’designers (the only ones left from that kind are Yohji, Comme Des Garcons and of course Alaïa...)

It could be easy to dismiss the 2 brands’ decisions to sell their stakes to bigger groups (Prada group and Renzo Rosso’s Diesel) as a mere financial move, like they would have sold their soul to the devil or something, but neither brands could have grown much more without any exterior backers or investors - maybe “they should have kept it smaller and local” is the way we would be tempted to see it today, but at the time it seemed a logical move, but we hadn’t realised that it needed only a few years for fashion to spread the same boring, uniform way from Tulsa to Vladivostok.

Few years down the line, and after the founder’s departure, Helmut Lang (the brand) has become a “contemporary “ fashion brand that is merely a Rick Owens rip off for Barney's co-op allover the US– which is quite ironic as Owens is probably the closest thing to Helmut Lang (mixed with Giorgio Armani of course !) that we have today. I don’t even want to post pictures of the actual resurrection, I am not angry or nostalgic, the brand that we used to celebrate is gone and there is not much to do about it. Plus, they are not even trying to be a reference, so that lack of obnoxious behaviour earns them good points. I guess it’s like going to a Rolling Stones concert today and thinking about how great was the band that had the same name decades earlier.

So for the pleasure of our eyes, some looks from Helmut Lang by Helmut Lang…

- Fall-Winter 2003/04 for the direct inspiration it gave to Riccardo Tisci at Givenchy (among other looks of course) for modern eveningwear : 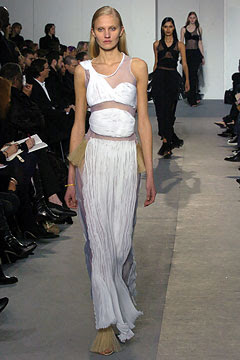 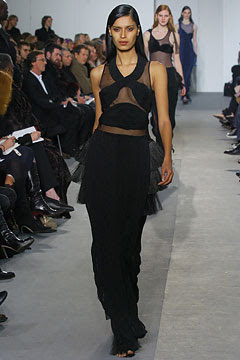 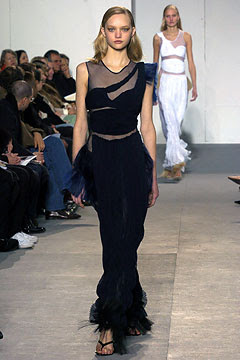 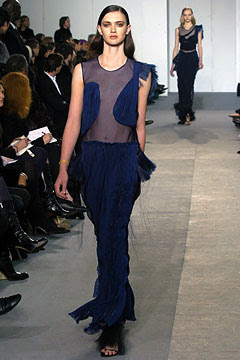 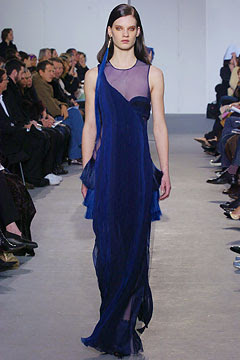 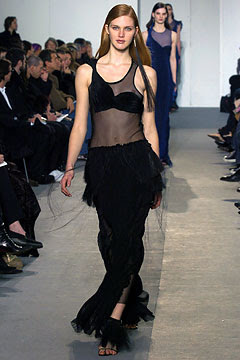 - and Spring-Summer 2004 for the inspiration of Panos Yiapanis styling of Rick Owens SS05 show... 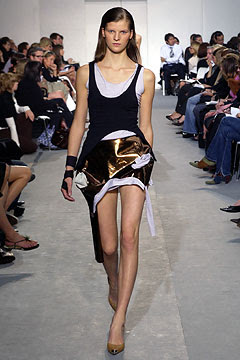 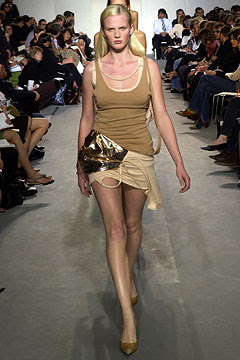 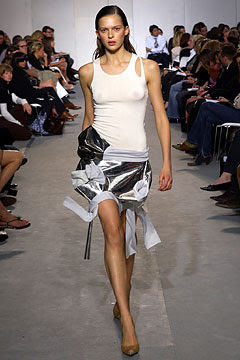 Funnily enough, and we'll see that in another post, among the worth watching designers today, quite a few of them have direct links to Helmut...
Helmut Lang is dead, Long live Helmut Lang !
(pictures style.com)

Maison Martin Margiela (I don’t even remember when it started being called “Maison” but that was a bad omen…), after the worse communication mishap ever, finally confessed recently to the departure of its founder – when everyone knows that he hadn’t been much around for the last 3 seasons. Its future lays uncertain, maybe as a caricaturally creative and crafty fashion joke to please new markets? That brand, with all the cleverness of its codes and its irreverence, was set up for world domination from the start… but I didn’t think that would end up in trying to sell us white painted Russian dolls for Christmas. 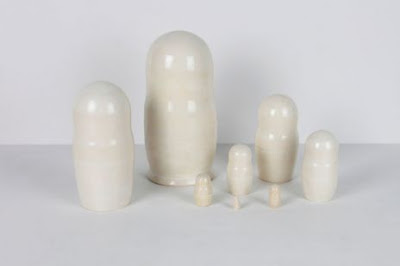 Worse than the logomania of the 2000’s : unnecessary branding by used-to-be-interesting brands(Picture from Colette.fr). Almost makes you regret Tom Ford ( scary, right?)

Anyway, fashion followers and 20 year old supporters seem to already have gone into mourning and well, starting spending money somewhere else. But as I say, new markets, new distribution, new branding in the end.

The whole thing could have probably been avoided, but the voice (and the 2nd brain) of the house, Patrick Scallon, strategy genius, had already departed to one of the most revered and resisting independent brand Dries Van Noten. Incidentally, and it demonstrates the total lack of leadership (single or multiple) at the house, the designer in charge of the ‘show’ part of the house (yes, there are different teams for all different lines… and no head designer…. Schizophrenia, I told you, oh, ok more of that later…) Demna Gvasalia has still his myspace running with believe it or not the pictures of his previous womenswear collection…. That looks of course way too similar to the last SS 10 Margiela very unpleasant show. All over blown up digital prints on mini dresses and boots, thigh-high boots/pants with huge zips in back, same shoulderpads (at least he is consistent with himself), domineering silhouette, ill-fitting bodices… But why keep it as visible? Plus why did he start womenswear when his Antwerp Academy studies led him always to menswear? (he even won the Grand Prix at ITS contest with his 3rd year men’s collection…). Looks like that collection – true, not many people saw it – was the perfect passport to get the job apparently.

I know who they should have given it to, but that’s another post…

There is a very interesting and on-the-spot analysis of the way MMM handled their communication and how they should have dealt with it, well, like a proper cult or a sect losing its headfigure ( Ron Hubbard style….) in Business of Fashion actually… (except that the article doesn't really suggest that maybe Renzo Rosso doesn't want to drive this brand in the realm of high fashion as we knew it ?)

I am not saying in any way that the team and the staff are not talented but…As a buyer, I know there are good pieces in the most boring collections or in the ones that I am not personally attracted to. Does that mean I should buy them? Hmmm.

As French will understand easily, “Y a t’il un pilote dans l’avion?” (Is there a pilot in the plane? subtle French title for the 1980 catastrophy spoof movie, Airplane Flying High).

I think the picture below totally sums up the situation as MMM now…( and probably kind of everywhere else too…) - and I am not talking only about the inflatable designer pilot, but also the smily good looking and (trying to be) reassuring communication air hostess... 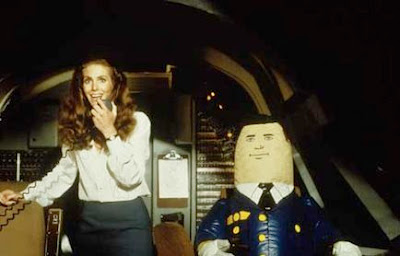 Anyway, who needs Margiela when you have Céline by Phoebe Philo ? 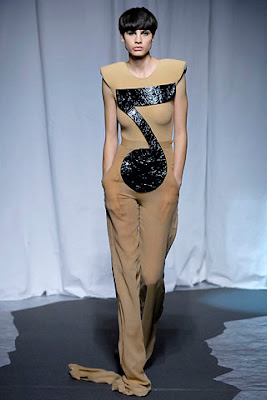 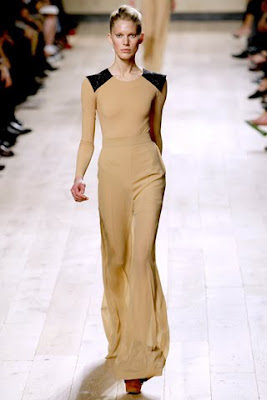 just remove the fun (well, just the Clodette *) out of your fashion, and there you go, flesh coloured body and wide flowy high waisted pants anyone ? (and shiny epaulettes, no shoulderpads of course....)

Happy new year, folks ! I will return with more failures and disappointments soon, and maybe some hope too...

* The Clodettes were the hot back-up singers(?)/dancers to french heartthrob Claude François...They always had the best and skimpiest outfits.... I should try to find that crazy video.
Shall we play fashion maths in 2010 ? (Martin Margiela - Claude François) X Phoebe Philo = Céline...
Posted by Alban ADAM