The mysterious non-presence of young French designers in French press... 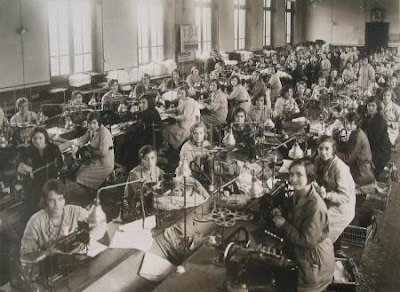 Sometimes the truth comes out of the editor's mouth. And it's been a little while now that many international fashion editors wonder what's going on in the French fashion scene, anything new? Well, they're not the only ones asking themselves this question, most of the insiders of the fashion industry in France have been thinking about this problem, trying to figure out what is wrong with young French designers.
What's wrong isn't the French designers, well some of them are, but the way the Parisian fashion industry doesn't support any of them is surreal, of course there are some exceptions and Maria Luisa is one of them, but that's unfortunately not enough. As Anna Wintour ( even her ! ) pointed in a recent interview to French TV fashion journalist Mlle. Agnes, there is a French exception to young designers support :
( link to the video : http://www.sundancechannel.com/fullfrontalfashion/video/ ) :
"I think it's totally important for all of us in the American fashion industry to support the young designers, and I think that's why New York's become such a vibrant fashion center, because people go there not only to see the Donna Karans of the world but a whole new generation. I'm just so sorry that there isn't something like that in Paris that's similar. I think that they should look for the younger generation here [in Paris] as well. Not only New York but London really supports their young talent; Franca Sozzani at Italian Vogue supports the young Italian designers, and I think when France is so known for its fashion industry — for them not to be reaching out to help younger people today is really a shame. [Agnes: "And there's space in your pages for them."] There's space in everybody's pages."

Apparently there's no spaces for young designers in French big magazine like Vogue or Numero, where the youngest featured french designer ( not being in a big house bearing someone else's name) is probably Jean Paul Gaultier... Yes it leaves your mind with a blank...
And when french fashion awards ( ANDAM ) gives funds ( about 150.000 Euros every year ) to British designers 4 years in a row, it really makes you wonders if all young french designers are crap or what? are they that bad that everyone ignores them so much ? I don't think they are, and they could do as good as Alexander Wang or House of Holland, and you'll admit it's not that difficult. But no, the industry in this country keeps trying to re-animate long time dead houses, and prefers to acclaim the geniuses from abroad better than looking at what's next door. Seems like there's no new talents for those people ( quoting Pierre Berger, YSL ex boyfriend ) and young talented designers like Anthony Vaccarello, Nicolas Andreas Taralis, Olivier Borde or Charles Anastase ( who relocated in London in search of support and found it over there) and many more just have to wait till an influential ( Hmm...Hmmm...) French editor dares to take a minute between a lunch with an advertiser's PR and a cocktail for an H&M collaboration to look a what they do and probably forgets about it the second after, already thinking of which dress from Balmain she hasn't shot yet.
Seems lame ? yes, it is !