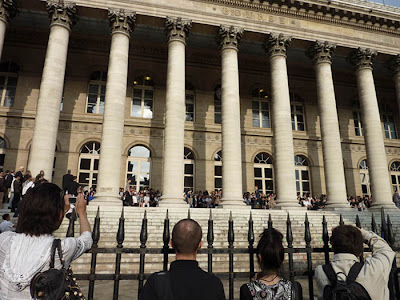 picture by Manfred Unger
Dries Van Noten was supposed to be an open air show, located in front the old Stock Exchange, but Paris changing weather forced it to retreat under the building impressive columns, offering to the audience a perfect rainy urban background.A truck pulling out in front the building with the sound system on, blasting A Black eye peas song started the show, but fortunatly the collection was far better than the soundtrack.
The collection, contrast of new technologies and hand made, was a travel from England to India passing by Tokyo, with batik and mosaïc prints, pinstripes and ikats, a modern but sentimental traveler's wardrobe.
It was a return to Van Noten's roots, the soft ethnic look he's known for with an artisanal feel to it, and as the show finished, approval came from above with a rumbling thunder following Mister Van Noten's salute to the audience. 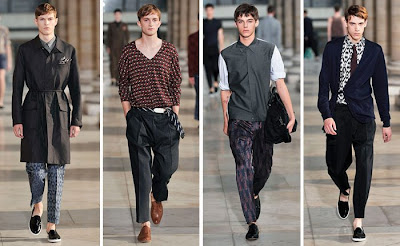